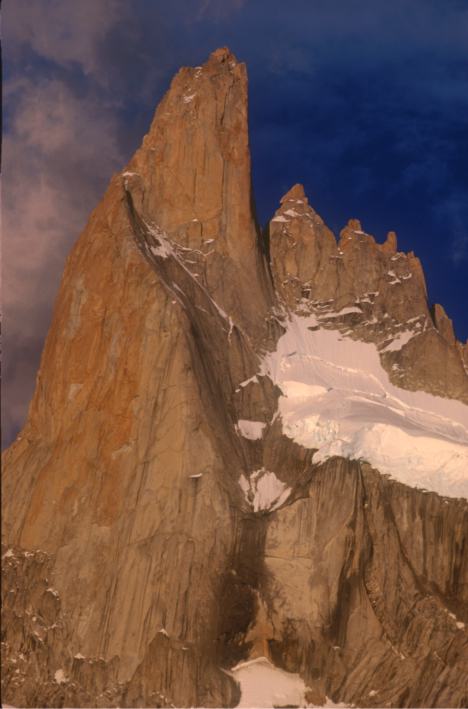 The first ascent of the Poincenot Needle is made by Don Whillans and Frank Cochrane, members of a six-person Irish expedition. The other members were Tony Kavanagh, Clive Burland, Francis Beloe, and George Narramore. After fixing ropes on the ice chute, on January 31, Whillans and Cochrane reached the summit where they nailed a French python in memory of Jacques Poincenot.

The route is the most logical line of the needle. It is developed by the great ice ramp that crosses the entire eastern wall until it reaches the shoulder and then the climb continues to the southwest on rock or mixed. This depends on the amount of ice that has accumulated from previous storms. To reach the beginning of the ramp, you will have to cross horizontally from the bergschrund until you reach a relay in the rock. This is the most vertical part of ice climbing. Carrying an ice stake for a berry relay can be helpful. Already climbing on the ramp the insurance is placed on the rock. Upon reaching the shoulder, the route continues through horizontal terraces (about two lengths) that lead to the west. There the cracks to climb are several, but the rule of always looking for the least difficulty will be followed, if it becomes difficult, continue to the left.

The rappels are due to the marked dihedrals that were avoided on the left during the climb. During the descent it is necessary to pay attention not to go over the horizontal terraces that lead to the ramps of the ramp and go down the overhanging south wall. While we rappel we can see a notorious pillar that marks the height of the horizontal terraces that lead to the rappels of the ramp.

The first solitary ascent to the Poincenot needle is made by the Austrian Michael Messner on February 10, 1988 by this route. In the winter of 1999, a group of Englishmen made up of Andy Kirckpatrick, Nick Lewis, Jim Hall and Paul Ramsden were a long way from the end of the difficulties on the Fitz Roy Supercanaleta route. Then they climb the Via Whillans de la Poincenot in what would perhaps be the first winter ascent. Difficulty: 50º / 60º ice ramp, 300m; mixed shoulder 5+, 50 m; final part in rock 4/5, 300m; development 650m.